Behind the Scenes on my 2012 Showreel.

A Short Film/Showreel from my South Island Road Trip.

Two weeks ago, i was sitting at home looking at a blank schedule for the next week or so on the work/project front.... spare time was aplenty! I had long wanted to undertake a road trip of the South Island, just loading up the car with camera gear and driving, town to town, and stopping whenever something caught my eye. As it was coming into Spring and the last big snow dump of the year having just occurred it seemed like it was now or never... (or maybe next year i guess). Regardless, eager to push myself, my skills, my gear, and my finances, i loaded the car with gear, clothes and snacks and jumped on the ferry.

My main goal of the trip was to not only visit all the big scenic spots that the South Island is well renowned for but also to try go 'off the beaten track' a little bit as well and see what i could find. Another goal was movement, whilst i'm a big fan of tidy composition and static video shots, with this showreel i wanted to be a bit more proactive in finding movement in the objects and landscapes i filmed. If that was not possible, then i wanted to move the camera either via tilt or pan on the tripod, or using my Glidetrack Slider. I also found that when shooting at 200fps slow motion even the most shaky hands generates footage that is still very 'floating' like. So for a number of shots i was able to film moving subjects handheld yet still pull off a controlled type look which suited the piece.

While i was mostly quite fortunate on the weather front i did often find myself dodging the storm fronts that were coming in, on one day this worked to my advantage however as i was able to race ahead of the front that was coming from the South and set up to film it approaching the Southern Alps which generated a very cool looking lenticular cloud at the center of the two opposing fronts. I set up the 5DmkII on a 20mm lens to get a wide shot timelapse of the sky and the fence and tree in the forground. I then set up my Sony FS700 on the long end of a 24-105mm lens to get a close up of the lenticular cloud doing it's thing. Shooting at 1fps (and speeding up x2 in post) i got a really great looking shot which intercut well with the wide shot. 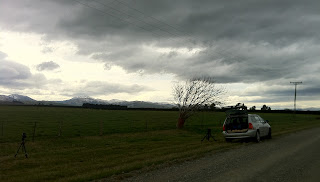 In the South Otago, i set up down a local farm road to film two seperate
timelapses of an approaching storm front over the alps. A still from the
5D mkII timelaspe is below, and the close up from the FS700 is below that.

Next, i found myself zipping through the Catlins on the South-Eastern Coast. While the weather was pretty shocking and had thwarted a lot of my attempts to get some 'beauty shots' of the region, i knew i wanted to visit Purakaunui Falls. I knew they would provide an epic looking shot, but I was also extra keen to check it out because with the large rainfalls that had just fallen over the region the waterfall would be absolutely raging, and it was. It was lightly raining when i arrived, so i chucked a plastic sheet over the camera, trekked down to the falls and clambered out onto some rocks off to the side and set up. I did a few tilts and static shots at 200fps (framing out the hippies who were meditating and juggling over to the right side), packed up and headed back to the car. 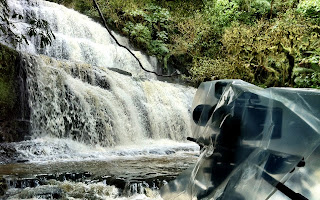 Purakaunui Falls, in The Catlins.

Next up i stopped by the Otago highlands in an oddly calm and clear day, i took a drive down a few farm roads and pulled over near one of thousands of interesting rock formations that litter the area. I jumped a few fences and set up the 5DmkII to do a timelapse, meanwhile i roamed around out of frame doing some shots with the FS700 and the Glidetrack (only one of which i ended up using i believe). 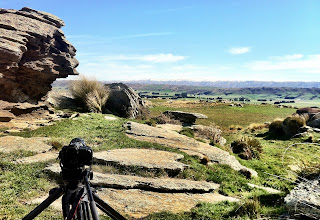 The 5DmkII timelapsing (above) and the final shot (below)

Another key motivation on this trip was to get some time up in the mountains via a helicopter. Fortunately, knowing a friend who worked for a local Heliski company meant that if i made a short promo video for them i would be able to spend a day up with a group of Heli skiiers free of charge. Perfect. While i hadn't skiied in years, i geared up, stripped the camera down to it's barest form, wrapped it in a plastic cover and jumped in the chopper. What followed was day of breathtaking vistas over the Southern Alps mixed with terror at navigating some of the slopes (especially with a camera looped around my neck). Nothing can quite describe the feeling of being dropped off my a chopper at the top of a mountain, watching it take off and then having it majestically come pick you up at a nother peak. Just incredible. While only a few shots from made it into my final reel, the footage will now go into the promo video for Southern Lakes Heliski which i am editing now.

Eight days, seven nights and nearly 4,000km later i made the final journey from Christchurch to Picton and jumped on the ferry back to Wellington. It was an amazing trip, the freedom of moving from place to place and filming whenever and wherever i wanted was invigorating, and an experience i won't soon forget! Below are a few more stills and photos from the shoot, as well as the finished video at the bottom: 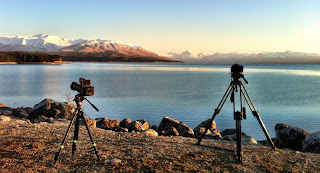