...and now for something a little different.

Recently i was asked by some friends if i could make a video invitation for their engagement party. The video would be shot using miniature figurines and a cardboard set, it would tell the story of my friend Calvin's proposal to his fiance Pam. At first i'll admit i was a bit reluctant, mainly because my current job has me working long hours leaving me little free time in the evenings, and come the weekend i'm generally pretty exhausted and enjoy just lounging about the house and taking it easy.

However, Pam and Calvin's enthusiasm for the project and the length they went to in creating the very cool sets and figurines totally won me over, and i really got into a creative frame of mind with the project. While also embracing it as something new and challenging, as i my background is mainly in shooting live action video and landscape photography/video. This project presented a new set of problems and issues which i hadn't come across in my previous film experience and they were fun and challenging to work through.... but also frustrating at times haha. 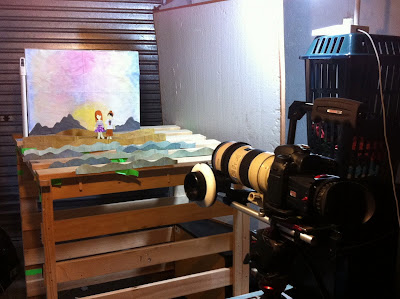 
Upon taking delivery of the sets and figurines, i went about clearing out the garage to create a studio space for the shoot. Due to the nature of the setup, i had initially thought about shooting the piece as a live action video which would be simple to shoot and edit. I had immediately ruled out stop motion video as i knew i did not have the time, experience, patience, or precision needed to do it successfully. I then had the idea to find a nice middle ground between the two methods; i would have the action play out like a live action video (albeit a little slower) but shoot it using the high speed burst photo mode on my Canon 7D. I shot the action at 7fps, which meant that roughly 3 1/2 seconds of shooting would equal 1 second of video, so as long as the action was paced slowly enough it meant that the video would have a stop motion feel and i would be able to shoot it in a fraction of the time. 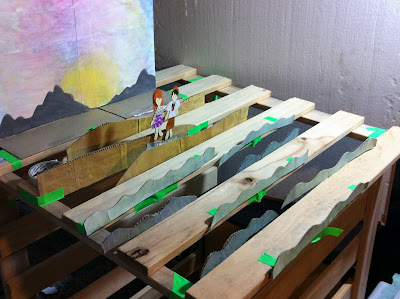 The makeshift stage, built from pieces of a slat bed.

In order to create a stage where Pam and Calvin could manipulate the characters, clouds, and waves of the set, i found some pieces of an unused slat bed in the garage and i knocked up a makeshift table. This worked perfectly as it allowed me to tape down the set pieces and stagger them to create some depth to the image, while also meaning the puppeteers could move the waves and figurines from below the stage. 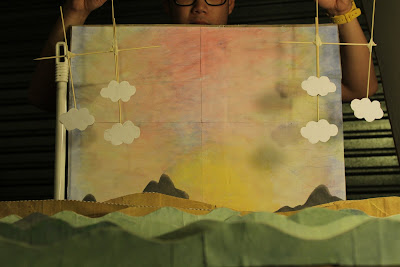 Calvin manipulates the clouds for the opening shot.

So, last sunday whilst we were all moderately hungover, Pam and Calvin came over and we spent a good 3 hours filming all the different actions and shots. As i mentioned earlier, the story is based upon Calvin's proposal to Pam which took place at sunset on the beach. The directions given to me by Calvin was to make the video about 45 seconds long and to set it to the song 'Love Love Love' by Avalanche City. so my basic idea was to have enough coverage shots of the set, the waves, the clouds and the characters arriving at the beach, and then have the clouds reveal a wedding ring i the sky, followed by a few close up shots and some subtle changes to the faces of the characters. 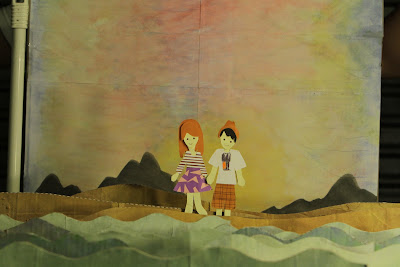 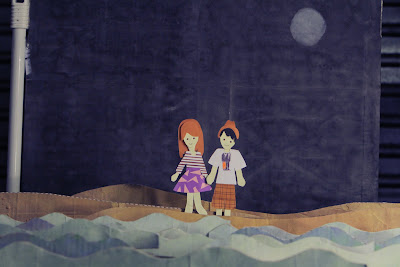 
Over about 3 or 4 nights i rendered all of the photos into their finished 10-20 second videos, and set about editing the video together. Whilst at first i found the idea of telling a story using just cardboard figures quite difficult, using a song and thinking of the piece as more like a music video/story really helped and i think i was able to create a simple and effective retelling of Calvin's story which also captures a fun and creative type feel, which also i think symbolizes their relationship. Overall i'm very happy with how the finished project turned out, and Pam and Calvin were thrilled with the video too. congrats again to the happy couple!

Posted by Luke Frater at 9:20 PM No comments:

An ongoing fascination (maybe to the point of obsession) of mine is filming timelapses of the sky. When the compositions work it is a incredibly rewarding experience and it really justifies the good 1-2 hours that you can spend sitting by the camera while it takes a photo every 10 seconds. On the otherhand, for every timelapse that is stunning to look at there are usually two other ones that were awful or just didnt quite work and you can end up kicking yourself for exposing it incorrectly and for wasting so much time while you were freezing your butt off as the camera just ticked away taking photos for final 10 second timelapse video that you wont even use! it is definitely a love hate relationship haha.

In saying that though, i do really enjoy the results, and while i still haven't quite worked out a finished project for all my timelapses i still see the value in them. In the meantime, here is my latest batch of timelapses (with a few older ones in there too).

Posted by Luke Frater at 8:36 PM No comments: