The anatomy of the '47A Productions' Logo

About five years ago when i first started getting into Directing and Producing my own videos, i got to a point where i decided that i needed to create a Production Company name, if not because it gave my end product a little bit more legitimacy, then certainly because it just seemed cooler. So me and my two best mates, Derek and Adam, put our heads together to think of a name that (a.) had some personal significance to all of us, and (b.) wasn't already in use somewhere else in the world (that we knew of). For the longest time we were fixated on 'Aurora Productions', Aurora Terrace being the street where our flat was and being an infamous one at that with its steep incline, one of the steepest in wellington and a constant barrier on any walks home from town. After discovering that a Production Company with that name already existed, we went with 47A Productions instead (our flat being number 47A on Aurora Tce).

Our first use of '47A PRODUCTIONS' came with our 2007 short film 'Scarfology' a mockumentary on the danger of Scarves in modern society. We entered it in the Vic Uni short film awards that year, winning Best Comedy, Best Doco/Mockumentary and Best Action. Since then, 47A PRODUCTIONS was used on any film project Me, Derek and Adam made together, while also being adopted by myself for my own personal and paid work projects/jobs.

So with a name sorted, we just needed a logo, something cool looking to adorn the beginning of all our videos. My initial efforts at designing a logo had the right feel, but it was rather lacking:

In 2008, i was in the midst of my post grad year of Film at Vic, and with the release of my short film 'Vanished' fast approaching, i knew i needed a stylish and more professional looking logo. Luckily, i was fortunate enough to be flatting with a Design student at the time, and Alex (bless her) graciously offered to design me a Production logo for the company. After a few concept stages, i really took a liking to her integration of a house into the 'A' as a starting point, and after some further tweaking and adjustments to the font the final logo was settled upon:

It was bold and simple, the white on black really stood out. I was stoked with it. As for presenting it before the film in the credits, I had remembered seeing The Assassination of Jesse James that year and really liking the logo for Brad Pitt's Production Company 'PLAN B', it was a plain black bold text in a white rectangle box. again, bold and simple. 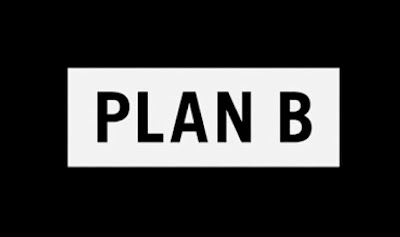 With that in mind, i cropped our logo the same way, to give it a nice clean look:

From there, i also toyed with the idea of getting some t-shirts made just for fun. I still want to do these someday! haha.... 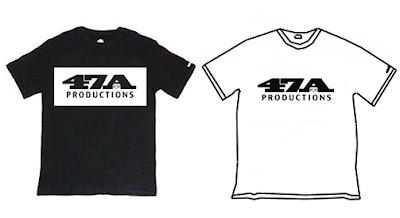 So to bring this story full circle, today i was thinking about how nice it would be to have an animated '47A Productions' logo at the start of my films. This was another idea that Derek, Adam and I had always thought about, but we didn't quite have the skill or animation software to pull it off. Our original idea was to have a cartoon car struggling to make its was up our steep street, eventually passing a small house at the top and then have that morph into our logo. While i'm still fond of that idea, i'm still not quite at a stage where i feel like learning the animation software to do it well enough, or paying someone to create it for me.

So today i set about making a simple animation video for the logo just to freshen it up a bit, while nothing too fancy, it's amazing what you can do by editing photos for a stop motion effect and adding some sound effects. So with that said, here is the 47A PRODUCTIONS animated logo that will precede all of my video work from this point on:

As i said, nothing too fancy but i think it's rather effective and looks like it has some solid production values to it. It will at the very least work well as a place holder while i think of some other ideas.

On a side note, I spent last weekend working on a 48 Hour Film with some friends, it was a brutal weekend of very little sleep, lots of junk food and some stressful moments leading up to the hand-in deadline. We got it in with 10mins to spare, and it was a great cast and crew to work with, lots of fun and a great environment to throw ideas around in. In the end i think we made a solid little film too. It was exciting to work on it solely as the Director of Photography too and only have to think about shot selection and lighting etc, whereas in the past i have been involved in Directing and Producing too and that can really wear you down both creatively and physically. I hope to be able to post the film here and write about it as soon as it is finished in the competition (possibly in the next week).

Luke
Posted by Luke Frater at 9:23 PM No comments: